Fluorescent UV lamps, similar in mechanical and electrical characteristics to those used for residential and commercial lighting, have been developed with specific spectral distributions. These sources are incorporated into fluorescent UV condensation devices such as the Atlas UVTest. These devices may be used in tests that vary light/dark cycles, temperature, condensing humidity, water sprays, and irradiance control. 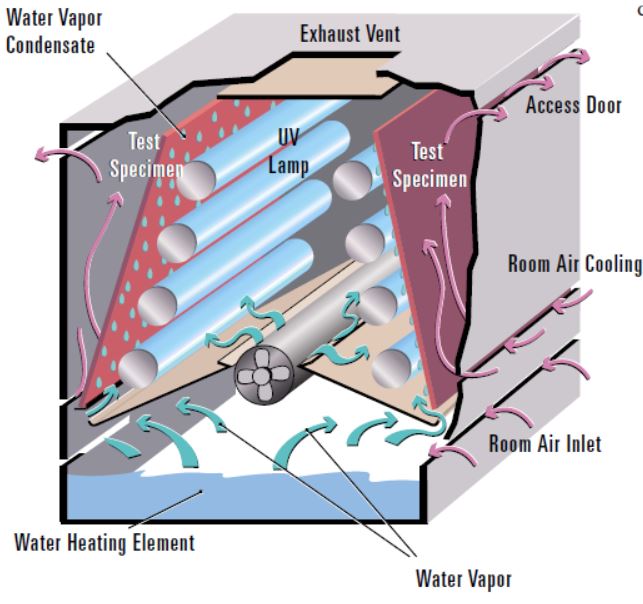 There are several different types of fluorescent UV lamps that have unique spectral characteristics. Fluorescent UV-B lamps (F40 and UVB-313), with a peak around 313 nm, have nearly all of their energy concentrated between 280 nm and 360 nm. A large percentage is at wavelengths shorter than what is present in natural sunlight. There is very little radiation with wavelengths longer than 360 nm. Reversals in the stability ranking of materials have often been reported between laboratory accelerated and outdoor tests when the accelerated test uses UV-B lamps. This occurs because of the large amount of short wavelength UV and the lack of long wavelength UV and visible radiation; the mechanisms of degradation may be significantly different from those of the “natural” tests. 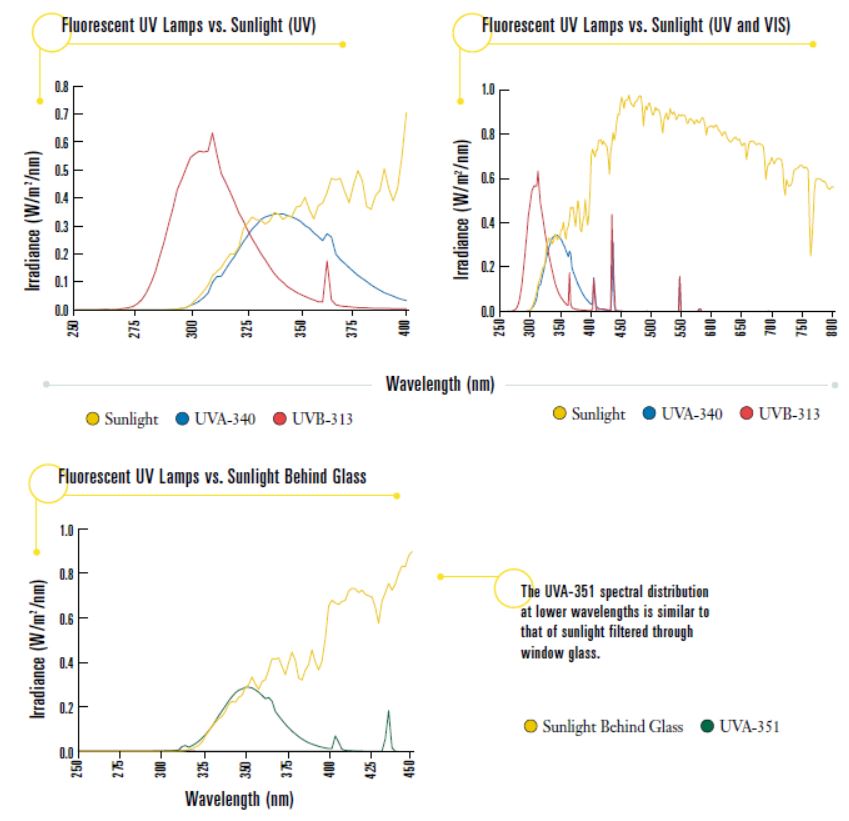 Because UV-A lamps do not emit radiation below the cut-on of natural sunlight, correlation with outdoor weathering is somewhat improved, but test times are longer than with UV-B lamps. It may be noted, however, that tests using fluorescent lamps are widely practiced. These tests are useful for relative rank comparisons between materials under specific conditions, but the comparison to service lifetime performance or correlation to outdoor exposures may not be valid. The best use of the UV lamps is for general screening tests, such as checking for gross formulation errors with an artificially harsh exposure.

The Lab Companion UV Tester is a new instrument, higher standard in terms of features, ease-of-use, accuracy and safety as compared to competitive fluorescent UV devices.

The listed standards and specifications may include several alternative testing options. The instrument meets at least one option in any listed standard. Standards are subject to change without notification, which may result in a change in testing technology. Always check the revision status of a standard with the responsible Standards Development Organization. If unsure about instrument compliance, please contact your local sales representative.